How I built my blog

What will you learn:

TL;DR - This site is built with SvelteKit and hosted on Netlify. It’s open sourced, take a gander!

Some time ago, I embarked on a journey to redesign my website. I convinced myself that I needed a fresh, clean, minimalistic, snazzy, whimsical, <insert adjective> site to be able to write content.

While this reasoning is flawed. Rebuilding my site allowed me to play with SvelteKit. A framework for Svelte that was fresh out of beta when I first started the rebuild. It was also an opportunity to practice my design skills. Opting this time around to design most of my screens in Figma before building.

Throughout this entire process I made heaps of mistakes and discovered what worked and what didn’t. All the lessons that I’m excited to share!

I’m no design guru so I can’t speak too much to colour theory, typography and other design-y stuff. But here’s what worked for me.

Start with the layout

I focused initially on building the layout of my site (both mobile and desktop) using grayscale and blocks. I went around to all the sites that I found aesthetically pleasing and took inspiration of their layouts. Then I used these blocks to play around with how my content would be structured.

This was focused only on the homepage since I thought that would be the most visually complex page. But I would have found value doing it for the posts page as well.

What I was looking for was: 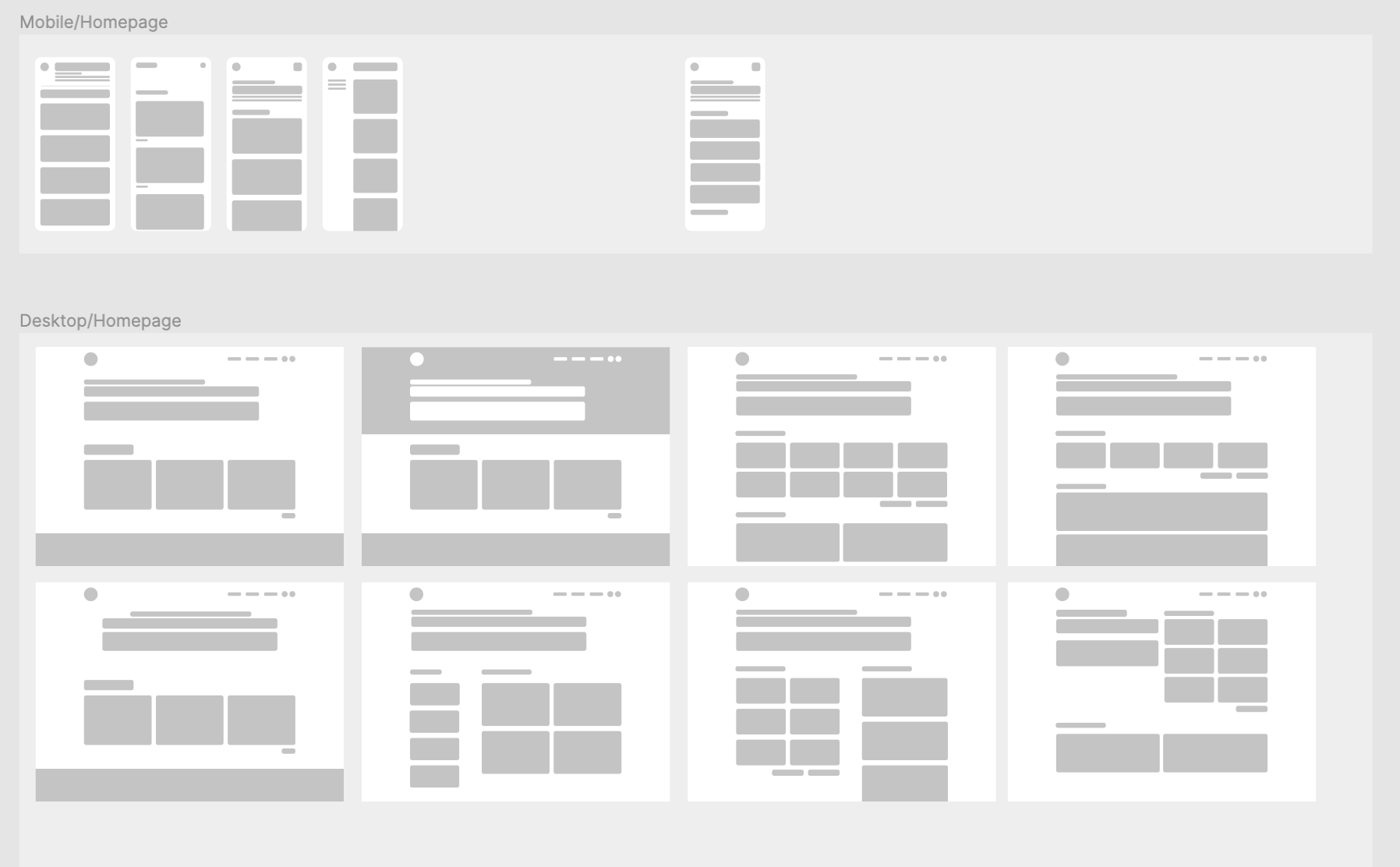 Setting up a design system

The next thing I set up was a design system. This system standardized the colours and the fonts that I would be using across my design. Building this upfront saved a bunch of time later on. Changes to font sizing or colour could be done in one place and it would adjust throughout all my design files. During this phase, I used Type Scale to define my font sizes and line heights. And then a Figma plugin, A11y - Color Contrast Checker, helped me find accessible font colours for light and dark backgrounds. 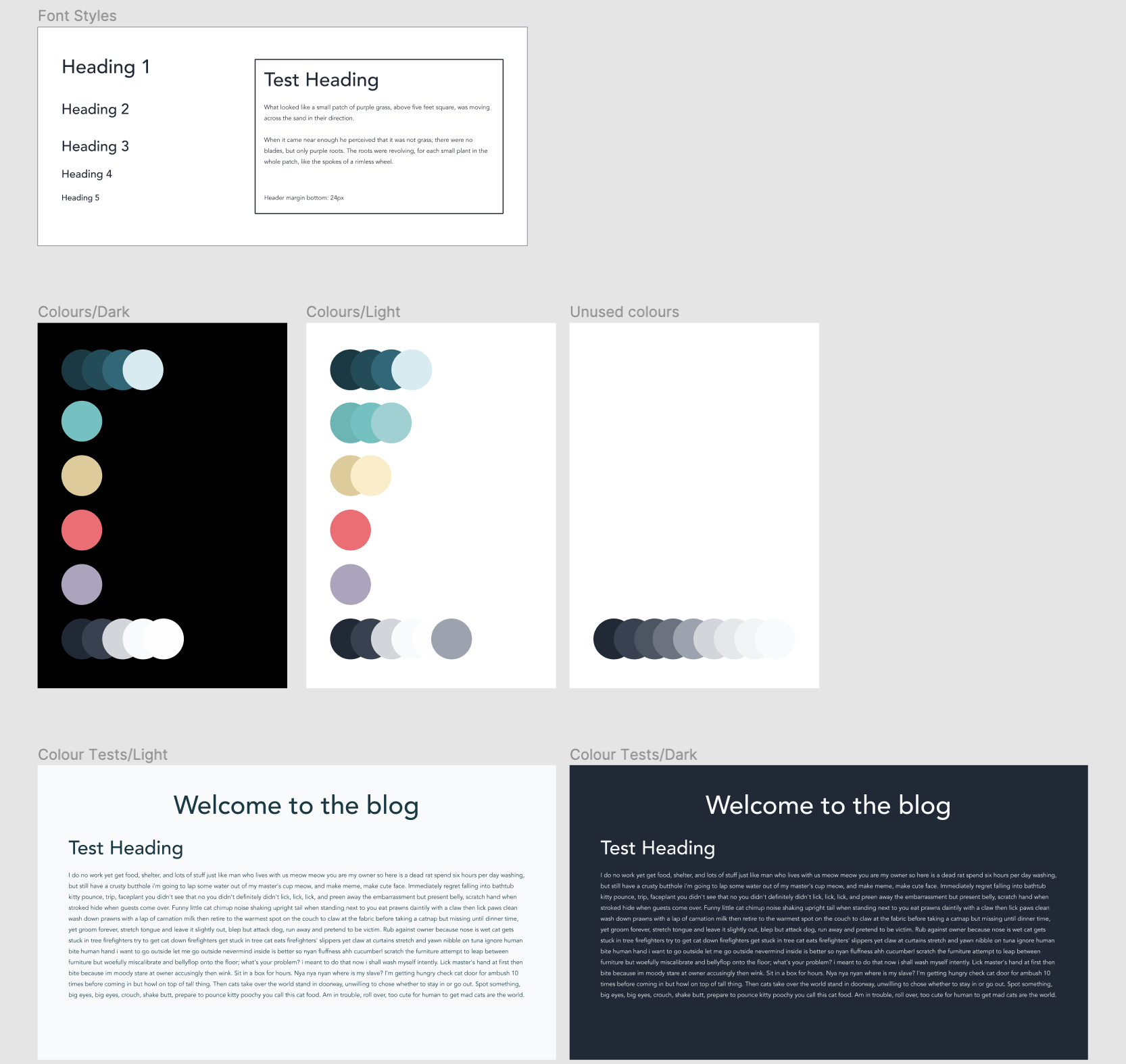 After picking a layout, it was only a matter of replacing those gray blocks with actual content. I used components in Figma to standardize what a Post card would look like. You can also give properties to components. This means you can define components in different active states or theme options, like my post cards which have both a dark and a light theme property.

The goal at this stage was to have my site look as close as possible to the finished product. This step took time. A shit ton of time. Much of it was spent figuring out how to use Figma. But there was also time spent second guessing my design and tinkering with different layouts. Ultimately, these making these decisions up front meant that I could spend more time working on the build.

I have a tendency to get distracted by shiny things. And this blog is no exception. When I found out that SvelteKit was coming into public beta, I jumped on the bandwagon. This involved a full rewrite of my site. I was coming from 11ty and nothing survived the transition.

If you’re familiar with React and Next.js - SvelteKit offers similar sensibilities. It offers both server side and client side rendering. A built in router. Developer environment optimizations. And Svelte, which has been a joy to use.

Styling is done using SCSS, a css preprocessor. Out of the box, styles in Svelte are scoped per component. Posts are processed using Mdsvex. This package is similar to MDX for React. It lets me define components and import them into my markdown. For example, this alert box is a Svelte component!

I can then import the Alert box into any of my markdown files:

For the search, I use Fuse.js to do the fuzzy search matching. The search and tag filtering probably warrants it’s own post. If you’re interested bug me. But I’ll give a quick rundown of it. Fuse.js takes in all my posts, and keys off my post titles and tags. In other words, you can search for both titles and tags. Svelte will then react to typing, by using a reactive declaration $:, and it will call Fuse to return results based on the current search. This search should also be scoped to the currently selected tags (or all tags if none are selected). To be honest, I’m not entirely happy with how I built this. It works but it feels… wrong. I’m currently in the process of refactoring my search, but if you want to see it in it’s current state - the code lives here.

Finally, the site is deployed on Netlify which has been the hosting platform I’ve used since my 11ty days. It’s been great (and free) for my use case. SvelteKit has a Netlify Adapter that creates a Netlify function for dynamic server side rendering. Along with hooking into Netlify fun-ness like Netlify redirect rules and forms.

Other than the search and tagging functionality, this build was pretty straightforward. But even so, there are decisions that I made that are hard to reverse. I wanted to share these in case you’re facing a similar decision!

I heard of this new Static site generator, Astro that looks very interesting…

Nope. Not going down that path.

What’s next is to populate this site with more content. I’m also working on a better flow to get my posts from draft to publish. Doing some refactoring, lots of polishing. And more whimsy, because you can never have enough. If you’re curious you can view my project roadmap and you can see the source code for my site here.